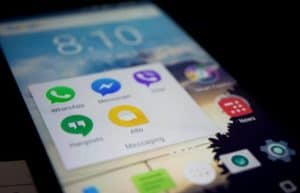 If you’re an active member of the swinger community or love sending nudes without them being spread all over the internet, you probably have the Kik app downloaded to your phone. But the instant messaging company announced that they would be shutting down their app service to focus more resources on their cryptocurrency, Kin. Kik then claimed they would remain open, so for now, you can keep using Kik, which tends to be the more popular option among swingers.  For those of you looking for an alternative to Kik, we reviewed the options.

Honestly, we aren’t sure if Kik will change their mind again and go back to shutting down.  Even if you like Kik, it would still be smart to learn which messaging alternative is the best to provide as much swinger privacy as Kik. You need to be able to send those hot nudes to your present and potential swing partners! Here are some pros and cons for the top relevant apps and some core things to consider when finding a new platform that works best for you.

Fun and easy to use, but becoming more controversial. There is some question about how private the encryption really is, and a lot of people believe Snapchat is not upfront enough about how they treat their users’ data.

It is fast and reliable but commonly used for casual/professional communication, making it hard to strictly keep this app for your sexy groups. The crossover risks your privacy somewhat. Since being acquired by Facebook, WhatsApp’s commitment to privacy has become a concern, but for now, encryption is still solid.

One of the most secure options for encryption and privacy. Telegram has employed professional hackers to try and break their system.  Occasionally, these security researchers do find bugs that have been immediately fixed.

Wickr has high privacy considerations, like the ability to download it without sharing your email or phone number.  It is a common option used by many in the swinger community since Kik announced their shut down.

Another secure choice, and it features end-to-end encryption across all services, including video and voice chat.  It is 100% open-source and independently audited.  Originally designed to help business teams securely collaborate.

It is one of the many alternatives to KIK.  MeWe started up as a competitor to Facebook and is a very common download by vanilla people.  This messaging solution is not only for swingers.

Built by gamers and adopted by some users in the swinger community. Definitely not a top choice for most people if privacy is a concern, but the easy-to-use interface is appealing.

This is not an alternative to Kik, but it is a great tool that can be used to create a secondary phone number that you can then use to sign up to any of the above apps anonymously, thus eliminating the risk of crossover with your “vanilla’ number that you use to contact your friends, family, and colleagues. As a communication tool on its own, there are no major benefits that make it a better alternative to any of the aforementioned apps. It should be mentioned that Google Voice numbers are only available in the United States. The numbers can still be used to sign up with a messenger app that can then connect you to people internationally, but if you’re from overseas, you won’t be able to create an account.

Most of the above messenger services have an official policy against pornography. Still, it’s yet to be seen how intensely that policy is followed or what constitutes pornography under those terms, so it’s hard to know how viable these apps are for cyber swinging.

It should be noted that Kik is not perfect and doesn’t come without its own list of cons. And none of the alternative apps above offer a replica of its features. One feature that Kik had over its alternatives was the ability to easily verify a user’s authenticity by having a “live photos” stamp to certify that the person was taking photos at that moment instead of uploading them from a camera roll. This helped people to avoid catfishing or fake swingers, and other untrustworthy accounts. The self-destruct messaging feature was also appealing, and it didn’t require very much phone data to run, but the same can be said for many of the above.

Overall, the messenger app you use will depend on the partners you swing with. It’s worth downloading one or two of those apps for your swinging adventures and giving the people you meet at parties or online the option to contact you at either one. Obviously, downloading all the apps will be a waste of time and is the quickest way to lose all your privacy, so choose two from the above list and see which one suits your needs best.