You are here: Home / Swinging Basics / Should You Swing with Vanilla Friends? 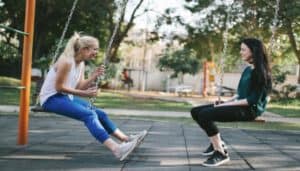 The thought of introducing your vanilla friends into your swinger lifestyle might be appealing. It offers a certain level of comfort if you’ve already been friends for a while, and it could enhance the experience if you were to play with people you love and trust. Also, swinging has opened some fun and pleasurable doors for you, so why not share the love, right? But hang on before taking that plunge with your non-swinging friends.

Think twice before acting once

You can always rescind an invite, but you can’t unsay it. The invitation alone opens up some potentially problematic doors. Your friends might feel uncomfortable, and it could affect your relationship in the future. Not everyone is as open-minded as you might hope, and some people might think they’re into the idea until they face it directly. There’s a saying in the swinger community: “Turn your swinger partners into friends, not the other way around.”

The experience of swinging with another couple can bring everyone involved closer together. Some people make lifelong friends this way, and it is partially because the relationship begins with a mutual understanding and interest in an enjoyable part of our lives. Sex doesn’t have to be sacred, but there’s no denying the importance it can hold for people.

Making your swinger friends into everyday friends is easier than taking the risk of alienating your vanilla friends by introducing them to an aspect of your lifestyle that might make them uncomfortable. This way, you can also slowly build the same level of fun memories and trust that you might already have with your vanilla friends – maybe even more substantial!

With polyamory on the rise and the swinging lifestyle becoming more socially acceptable, you might even find couples that were once friends (with benefits, of course) can become more than that. The lifestyle does lead to some truly unique experiences.

Swinging is a big jump

Chances are, if your friends are vanilla, they won’t want to jump right into swinging. Reflect on what you truly know about them.  What do you know about their sex lives? Are they genuinely vanilla? Have they ever mentioned anything outside the ordinary, or do you absolutely know they already have an open mind by their past actions? If it’s been nothing but baby steps outside of missionary, inviting them to swing might be too overwhelming for them. If they’re uncomfortable talking about sex with you, they most likely won’t be comfortable jumping into bed with you. Don’t overestimate the comfort level for other people.  Yes, some people hide their super wild sexy sides, but you’re more likely to find that your vanilla friends are purely vanilla and prefer it that way.

The experience of swinging with another couple can bring everyone involved closer together. Some people make lifelong friends this way, and it is partially because the relationship begins with a mutual understanding and interest in a very fun part of our lives. Sex doesn’t have to be sacred, but there’s no denying the importance it can hold for people.

Making your swinger friends into everyday friends is simply easier than taking the risk of alienating your vanilla friends by introducing them to a potentially uncomfortable lifestyle. This way, you can also slowly build the same level of fun memories and trust that you might already have with your vanilla friends – maybe even stronger!

With polyamory on the rise, and the swinging lifestyle becoming more socially acceptable, you might even find couples that were once friends (with benefits, of course) can become more than that. The lifestyle really does lead to some truly unique experiences. 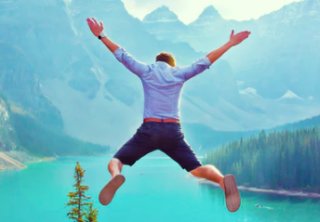 Suppose you’re close with another couple to the point where everyone cuddles, flirting and sexual innuendos with each other are regular, and things even get a little naughty when the wine is flowing. There is a good chance (but no guarantee) the sexual tension is felt by them too. All these markers are just that – good signs that your friends are not as vanilla as you may have thought and that they might be comfortable swinging with you. But this possibility doesn’t mean you should throw caution to the wind and go for it during one of these times.

It may seem like it could kill the mood, but bringing up the idea of swinging when everyone is sober rather than trying to jump right into it when people are drunk creates a better situation for everyone. It will give them time to think, rather than feeling pressured and like they have to make a snap decision to keep everyone happy with them.  But sometimes, people just like to flirt, and that’s okay. Don’t get your hopes too high!  You want to go only as fast as the comfort level of the slowest person in this potential foursome.

Your vanilla friends can try swinging without you first

If some vanilla friends express interest in the lifestyle (maybe they know about your experiences, maybe not), then they can always try swinging on their own terms with swingers other than you. You can suggest they join the local swinger dating site to find a couple that interests them.  Then ask after their experience and see if it’s gone well.  The first experience is often the most vital and can create the most strain on a relationship. If the vanilla couple hated the initial experience with strangers, then it’s likely they will never see or speak to them again. You don’t want to be the ones with whom they lose contact.

And they might be worried about the same thing! Even if they’re interested in giving it a shot, they’d be right to be concerned about how that might affect your friendship dynamic.

You might want to let them experience it a couple of times on their own first, just to let them test the waters and get their feet wet before telling them you’ve already played in the deep end. They might try it a few times, like it, and still decide it isn’t for them in the long run. What could be a lifestyle for you may still just be a quick fling for others.

Remember that being vanilla is not a bad thing 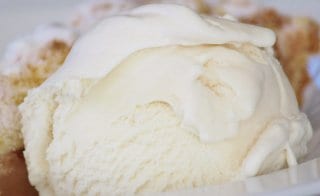 There’s nothing wrong with being vanilla. You’re well versed in the lifestyle, so you might not understand why anyone would want to keep themselves closed off from these beautiful experiences. But “different strokes for different folks” rings true here… and not in the way that you might be hoping. Don’t act holier than thou, more experienced, or condescending towards your vanilla friends while discussing the lifestyle. It will only alienate them and lower the chances of them wanting to experiment with any of it, which not only ruins the experience for you but also some potential swinger partners as well!

As with all sexual experiences, you want to keep things as positive and open as possible! The positive vibe includes before, during, and after, whether it happens or not. If you decide to go ahead and ask your friends to try swinging with you, try not to be offended if they decline. Remember that this is a big ask. The world we live in still has a lot of warming up to do around anything outside of the traditional monogamous relationship. People who are open and experimental may still feel some deeply rooted shame in sexuality as a whole, let alone something as taboo as sex with multiple partners. Don’t be surprised if someone who often touts themselves as woke or kinky gets thrown off by the idea of swinging because it still might just not be their cup of tea.

All in all, we recommend that you keep your vanilla friends separate from your swinging adventures and let them warm up to it on their own terms. This is a massive leap from the socially acceptable, monogamous sexual lifestyle many people still grapple with – mind the gap!