You are here: Home / Lifestyle Tips / Politics and the Swinging Lifestyle 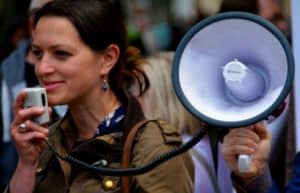 In general, swinging and life are both more enjoyable when we focus on the things that bring us together.  This is why there’s an unspoken rule to avoid anything political while chatting with fellow swingers.  There are so many other great topics to share.  You can talk about hobbies, sports, travel, places for sexy shopping, sensual tips, and all the other things that fun-loving people like to discuss.

Avoiding politics is a helpful tip, but it doesn’t explain why politics can be such a hot button issue for some swingers.  Understanding the political minefield can better help you & your partner find the best path for you when connecting with other swingers. So we are going to give you a quick crash course on this hot button topic.

The swinging lifestyle is a vast & welcoming umbrella.  It includes people of all different political persuasions.  Your own local swinging situation is going to reflect your own local voting results.  If your vanilla local area voted a particular way, then it’s a good bet plenty of the people in your local swinging community also voted that way.  The swinging community is a reflection of your local population.

Swinging does not discriminate.  All are welcome as long as they can be respectful of others. Now is also a good time to remind everyone that simply because someone voted for a politician, it does not mean they 100% support that politician on every position or that they still support that politician.  Many voters regret their past actions.  We can always be polite and respectful towards each other.  Your position on deeper tax cuts or better social programs doesn’t really matter when people are trying to set up some sexy time.   Swingers tend to be more interested in debating whether the same room or separate rooms are better or the best sex position. 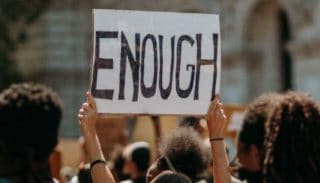 If politics are so controversial, why would any swingers bring it up?  Swingers tend to be passionate people, and sometimes a swinger might be caught up in the excitement that they forget about staying in the realm of safe conversation topics.  Maybe politics hasn’t personally impacted you, but that doesn’t mean it is not causing a big squeeze on other swingers.  The current state of politics is hurting many different people.  Some military veterans and active-duty military swingers are unfortunately too familiar with the human cost of political mistakes with military interventions.  Other swingers might have lost certain health benefits or have been laid off due to various political decisions.  Not to mention the financial struggles that can be impacting people due to political tax decisions.  Politics can affect people in different ways.  When someone is being pressured or squeezed, it makes sense they may voice their feelings.

Let’s also be honest – some people are stupid or at least say stupid things.  If you are trying to make a sexy connection, it is not wise to bring up voting.  Be smart and show your potential new swinger friends that you understand that there’s a time and place for everything.  In a club and trying to set up playtime is neither the time nor the place to start waving your political flag.  With a sexy person in front of you, compliment their sexy body instead of debating political opinions.  That is easier said than actually done because some lifestyle flirting can make some people nervous.  When that happens, the weirdest things can come out of their mouths & that includes political questions – yikes!  None of us are perfect, and mistakes happen.

Being concerned about politics isn’t necessarily a mistake.  Swingers generally are great at respecting people with different viewpoints, but not everyone is polite or respectful when it comes to politics.  This is one reason political differences can matter.  There are some political factions with less than respectful agendas towards certain types of people.  Imagine if someone publicly opposes gay rights but privately enjoys bisexual swinging; it would be understandable that other swingers would want to avoid a hypocritical swinger.  If a swinger is two-faced about one issue, can you trust them to tell the truth about their STI status or to respect your personal boundaries?

A second reason why politics can matter is that some fringe political groups are threatening to others.  First, let’s be clear that most people are good people, and it is totally fine to have a difference in political opinion.  We are talking about the fringe groups that see no problem in spewing hatred toward particular groups of people and mixing violence with their politics.  Even when violence isn’t blatantly promoted, there can be subtle threats.  For example, some groups pushing a white supremacy agenda give Nazi salutes at political rallies, which would not make any Jewish or minority swinger feel uncomfortable.  It is very understandable why specific political differences would matter and why some swingers avoid certain people.

Thirdly, politics can matter because sex is intimate.  During swinging, body parts are going inside another body.  You are about as physically close as is possible.  If a swinger is that close with another person, it is nice to know you share some common values.  Most of the time, this isn’t an issue.  The vast majority of the time, swingers can find plenty of common ground with others in the lifestyle.   Swingers understand that we are all different and that it is OK to have different opinions regarding personal values and beliefs.  The problem arises when there is too broad a division.  No swinger really wants to compromise their own personal values & beliefs when facing too wide a rift. 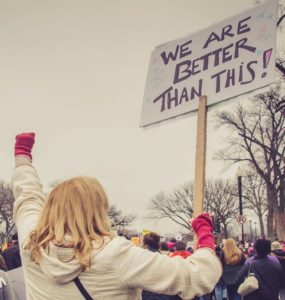 If politics do accidentally pop-up in your swinging experience, be prepared to handle them the best way for you and your partner.  If the couple are good people who made a nervous or rookie mistake, then you can help refocus on a swinging discussion by saying you prefer to talk about something else like traveling, which body part feels best, or how sexy they look.

If a couple keeps making political mentions, they might not share the same life priorities as most swingers.  It might be wiser to say thanks but no thanks and stop connecting with them.  Even if you think you belong to the same political party like them, there is no guarantee you 100% agree on all of the issues.  It is simply not wise to keep taking the risk of dividing people when there are so many fun & sexy things to talk about that bring us together.  Unless political debate is your fetish, you should distance yourself from this potential drama.  If they try to reconnect with you, thank them but say there isn’t a four-way connection.  Safer to be vague and not open the door to any conversations or debates about politics.  There is little to gain besides drama and headaches.  Here is an article for help in politely rejecting swingers.

If a couple truly offends you, it is usually best to withdraw and not engage with them. Suppose you feel unsafe while at a club or party, you can talk with the event organizers.  Before you engage or escalate a situation, think about your personal situation.  Did you expose any personal information to the troublemakers that could endanger your employment or cause family or friends problems?  You may be forced to decide if you prefer winning an argument more than you prefer remaining private.

We obviously can’t predict every situation you may encounter.  Be smart and brainstorm different scenarios with your partner to figure out how you prefer to handle them.  Thankfully this drama is not very common, and we can focus more on the sexier side of swinging.