You are here: Home / Lifestyle Tips / Feminism and Swinging 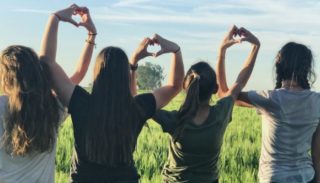 Many non-swinging people tend to believe that swinging is a completely male-driven endeavor, where women are often dominated by their partners and they are almost obliged to get involved in a situation that they don’t want. These assumptions are based on false assumptions that a) no woman would ever like to participate in such a vulnerable activity where people are encouraged to be open-minded and explorative. And b) no self-respecting woman would put herself forward in such a sexy way.  In reality, feminism and swinging strongly go together because they are both empowering for women.

Swinging gives women the confidence, trust, and freedom they desire.  No one is forced into anything.  Swinging is about couples deciding together what is best for their relationship using their own terms and personal rules.

When a woman starts swinging she soon discovers the freedom to be her own person (assuming she hasn’t already). If she wants to be sensual, provocative, sexual, lustful, or none of the above, it’s all good and welcoming.  It is on her terms working together with her partner.

There are several things in common between these two concepts. For example, women feel empowered, they feel like they are ready to have control of their lives, they feel strong, and possibly for the first time, they feel like they are now listening to their desires.  Swinging and feminism both place high importance on respect and consent.  Women have a clear and loud voice and they are not afraid to let the world know about them.

Swinging creates opportunities for same-sex exploration. it is very supportive of women exploring their curiosity.  So, if a woman has ever been interested in having sex or any other form of intimacy with another woman, and she hasn’t done it because she fears there would be societal repercussions, swinging can become her safe place to explore her bisexual side.

There will be no criticisms, stigmatization, or questioning the choices made by either a male or female in the world of swinging. A woman reclaiming her sexual prowess and desires is a feminist.

There are many misconceptions about the swinging lifestyle.  A common misconception is that swinger clubs or parties are filled with misbehaving men who are looking to hook up with young women. In reality, this isn’t the case. If you ever go to a swinging club or a party you will discover that it is filled with regular people looking to connect with other respectful & fun-loving people.  Everybody is aware of everyone’s wishes and respects this as well as using clear communication and consent.  There are no misaligned power dynamics in swinging.  All swingers have the same right to do or not do whatever they want with other consenting adults.

Within the swinging community, women are more commonly the driving force behind it all. There is no sexy fun with other people if the women do not give the green light.   If anyone doesn’t give a green light, then a polite excuse is made and everybody moves on.  Respect and consent are big cornerstones of the swinging lifestyle.

Women are usually self-determined and aware of the potential choices that they could make within the swinging lifestyle. It is unlikely that a woman is in a swinging party and she doesn’t want to be there or she would rather quit the scene and be somewhere else.

Swinging just like feminism empowers everyone to have an equal voice. In the outer world – more often than not – women are not heard, and this is why feminism is often a unifying concept for many women. Swinging women aren’t afraid to express how they feel and follow their sexual desires as equals.